Over the years we've inspired many designs similar to ours, and we invite people to send us their version of the rocker. In 1976 Jim received a patent for the function and unique construction used in the Vermont Folk Rocker.

Its maker unknown, this rocker has an undeniably 1970s style. The thick heavy lines mirror the fashion of the times, bell bottoms and platform shoes. 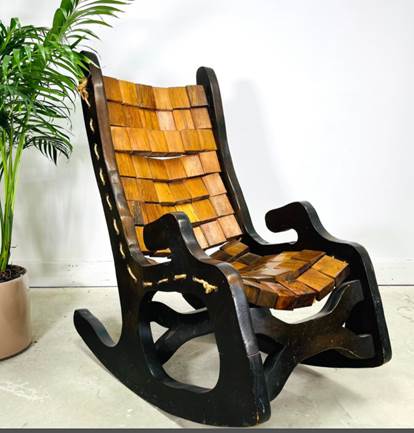 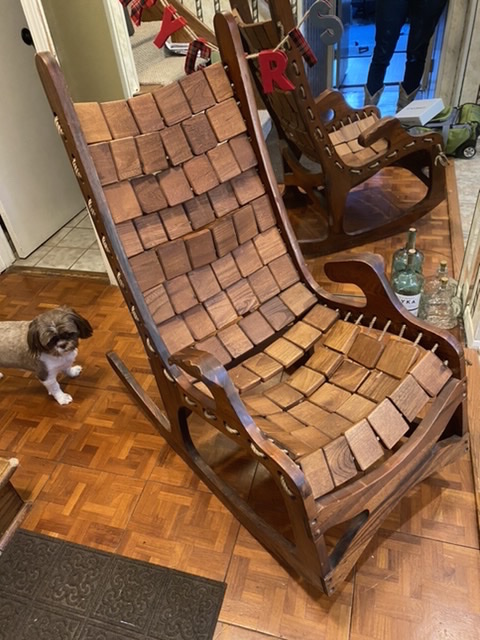 Watch the Rest of the World go by Rocker

This rocker was purchased from an estate sale in Texas. The buyer thought the rocker was an early one of ours, but it was actually an imitation made in the early 1980s, marketed as the "Watch the Rest of the World go by Rocker" in the Maryland and Washington DC areas

Gerry Grant makes a rocker inspired by ours, in Pennsylvania. At one time we made an ottoman using blocks but found it uncomfortable for the feet, and designed a footstool we call the footsie roll, with a cushion designed specifically for the feet. 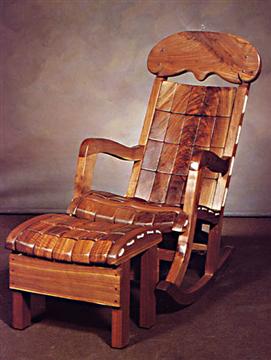 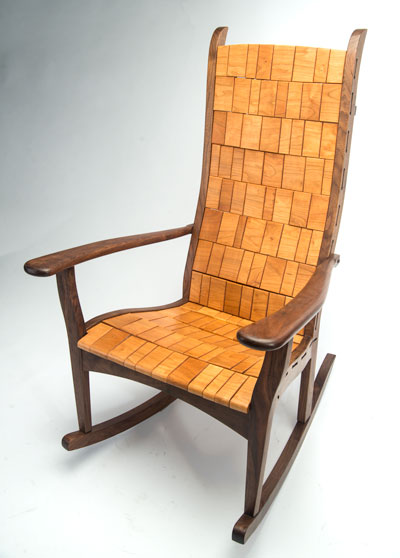 Since 2002, Alan Daigre has made a range of quilted rockers, barstools and arm chairs from his shop in Tennessee.

Darin Caldwell makes a rocker inspired by the Vermont Folk Rocker, with a direction towards the frontier, log cabin look. 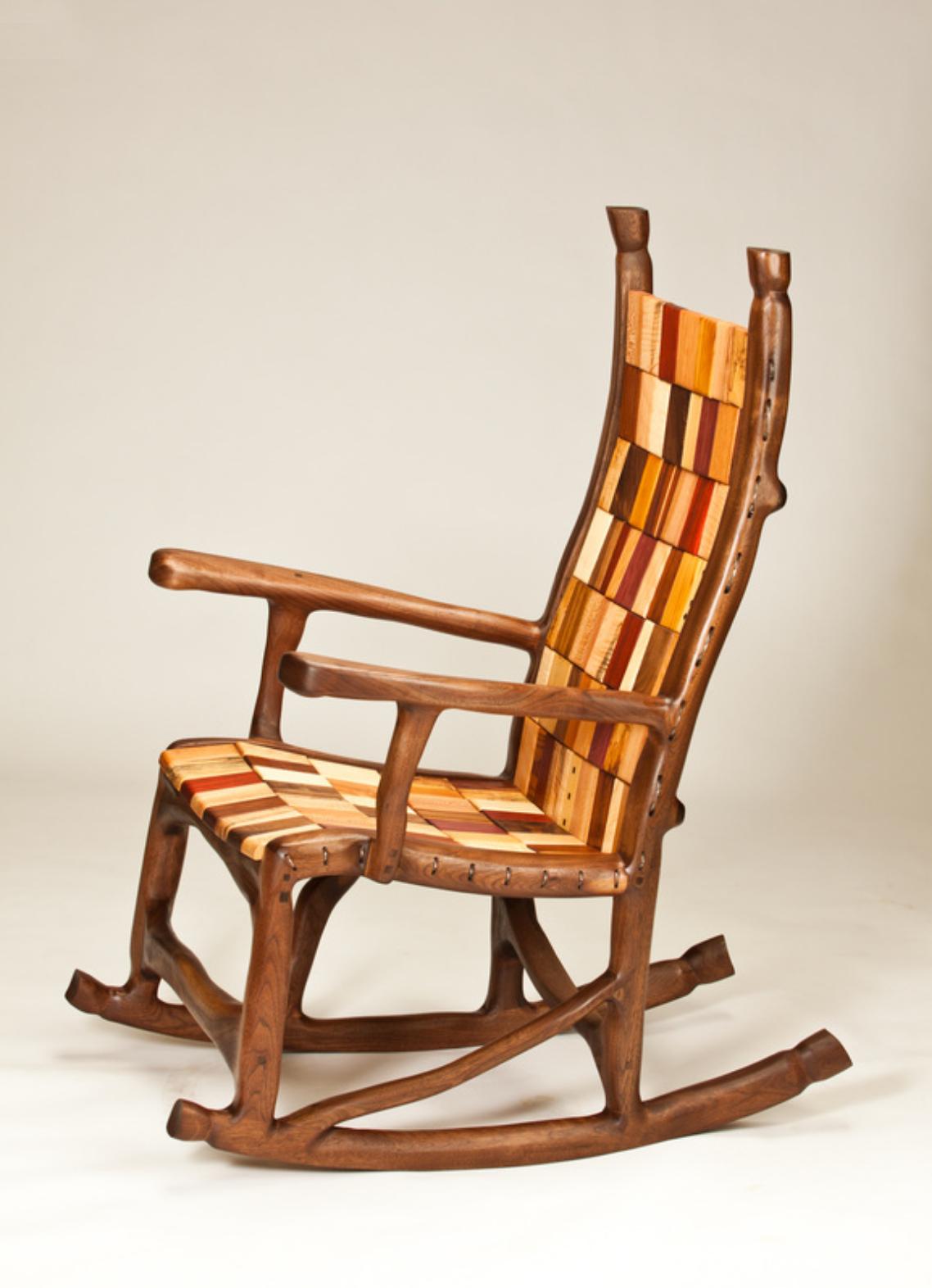 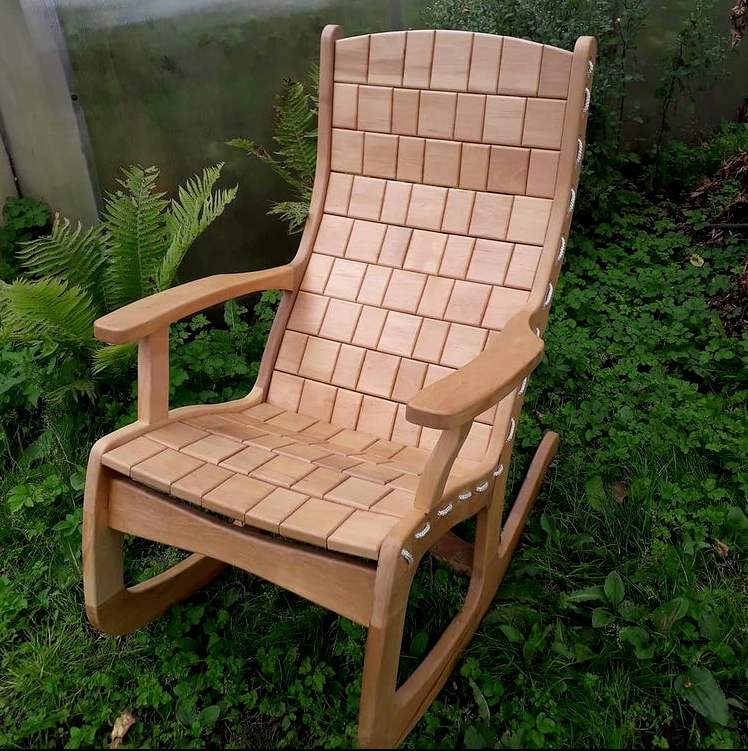 Pavel Mishin makes a rocker that is an offshot of our design, in Bryansk, Russia. Pavel was inspired by our rockers 10 years ago, and has created a range of similar pieces. 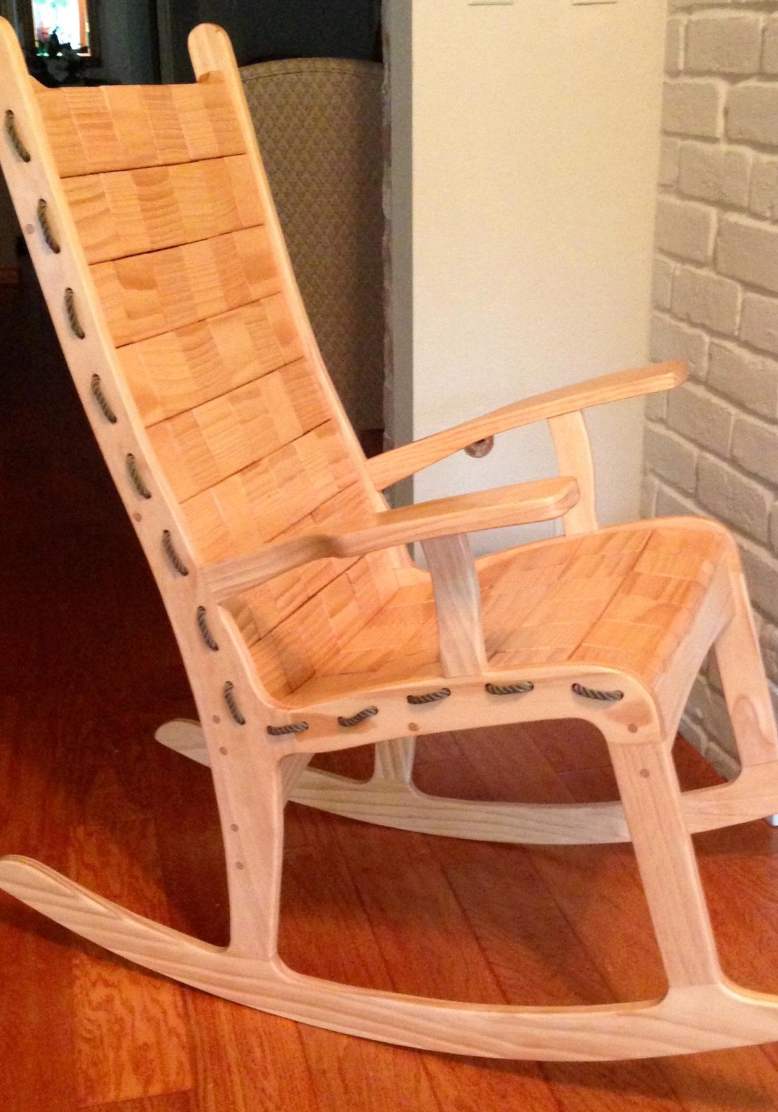 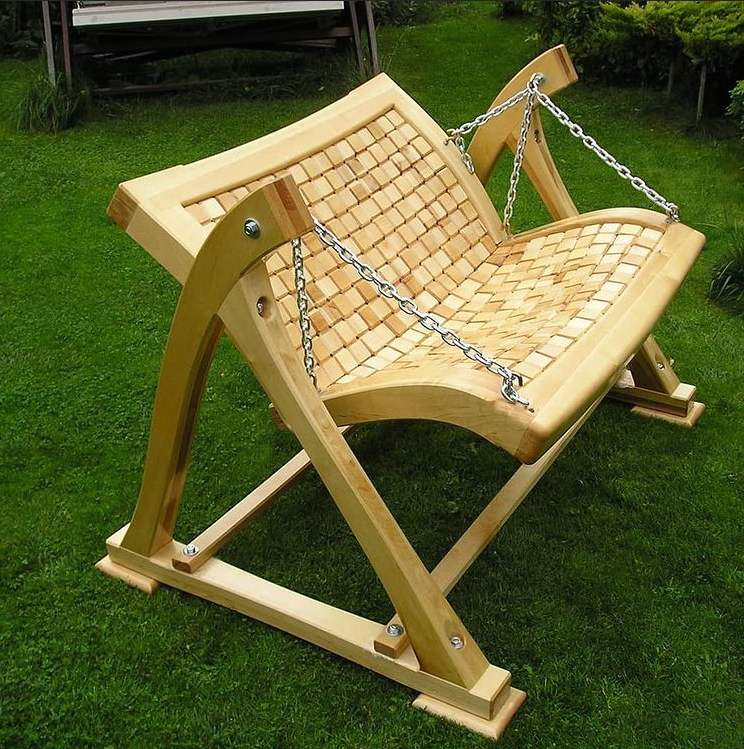 SunWolf Tunsin made this rocker, using a Sam Maloof inspired body and a woven block seat similar to the Vermont Folk Rocker. 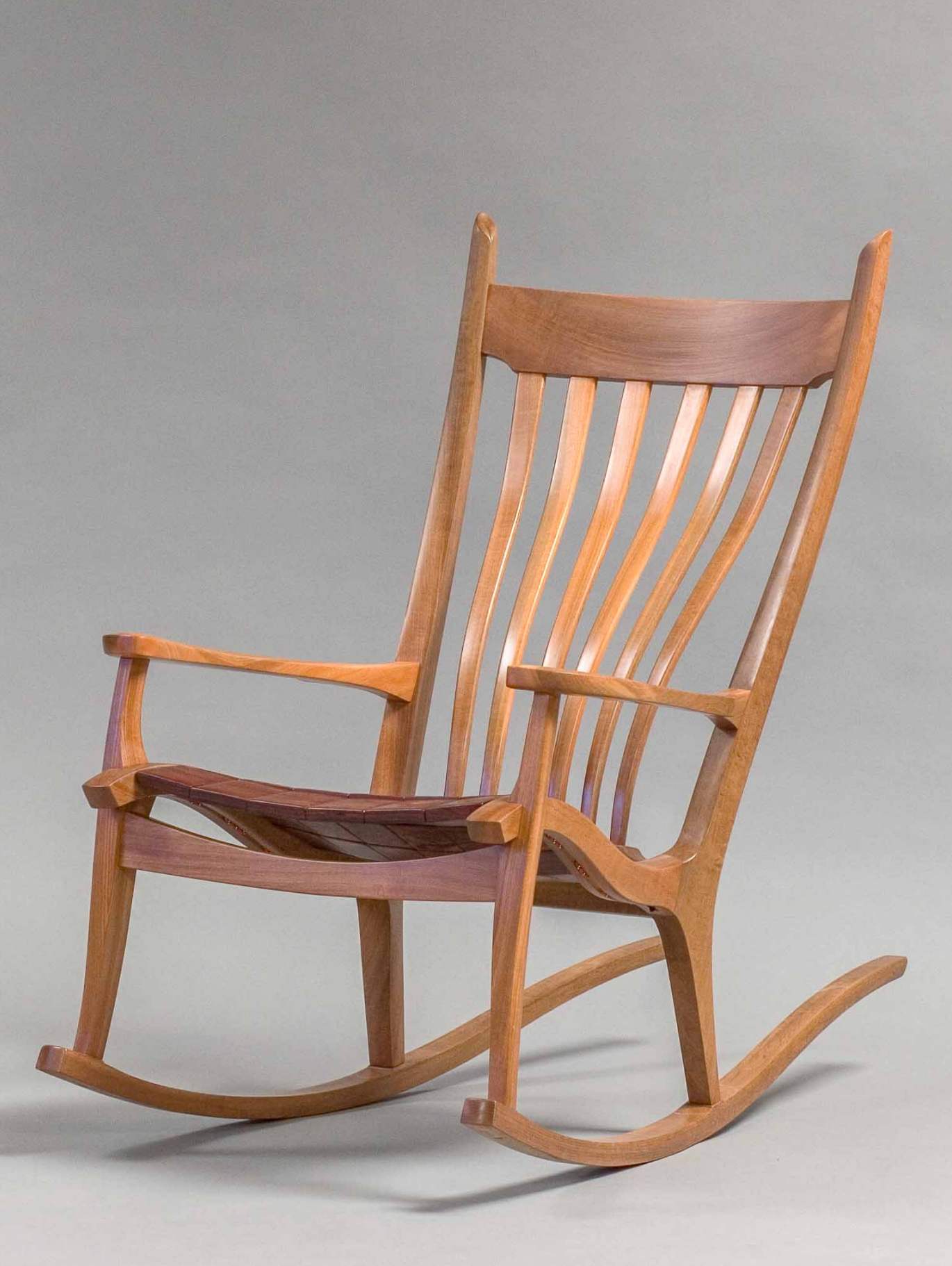 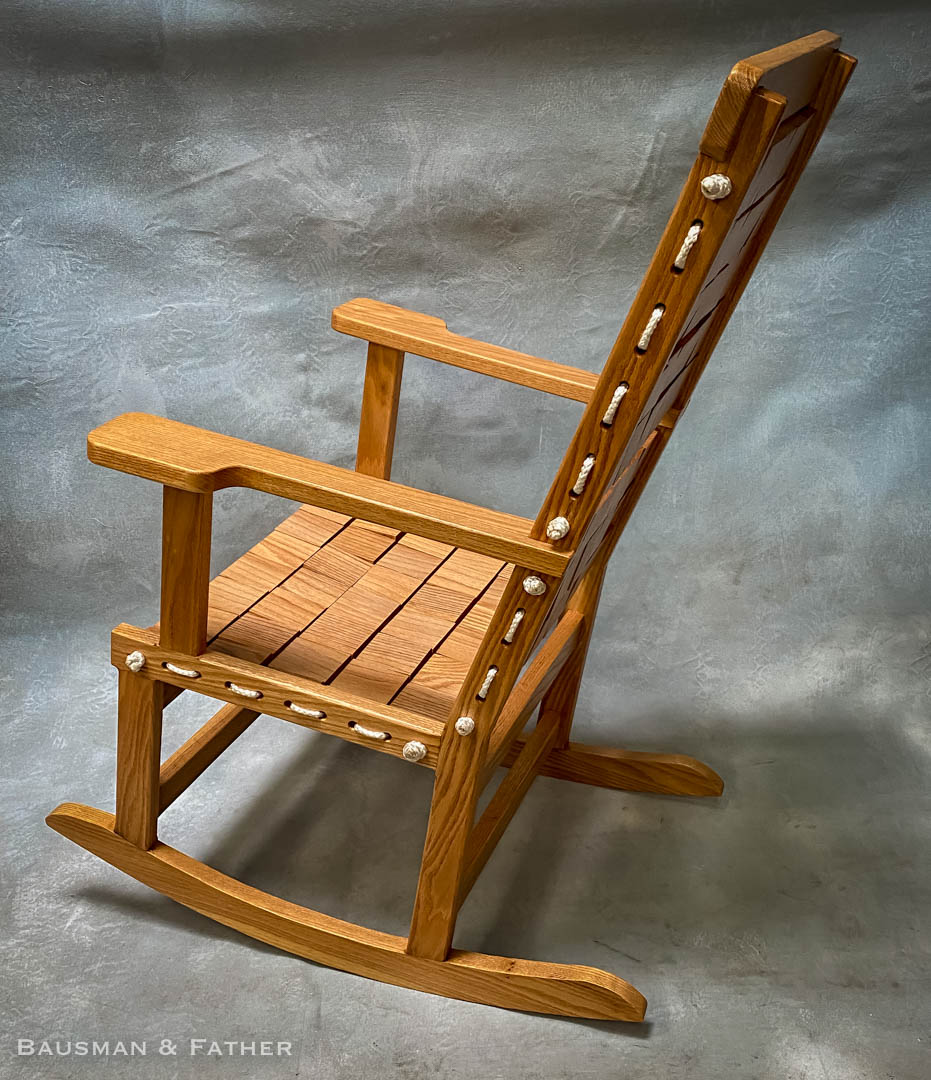 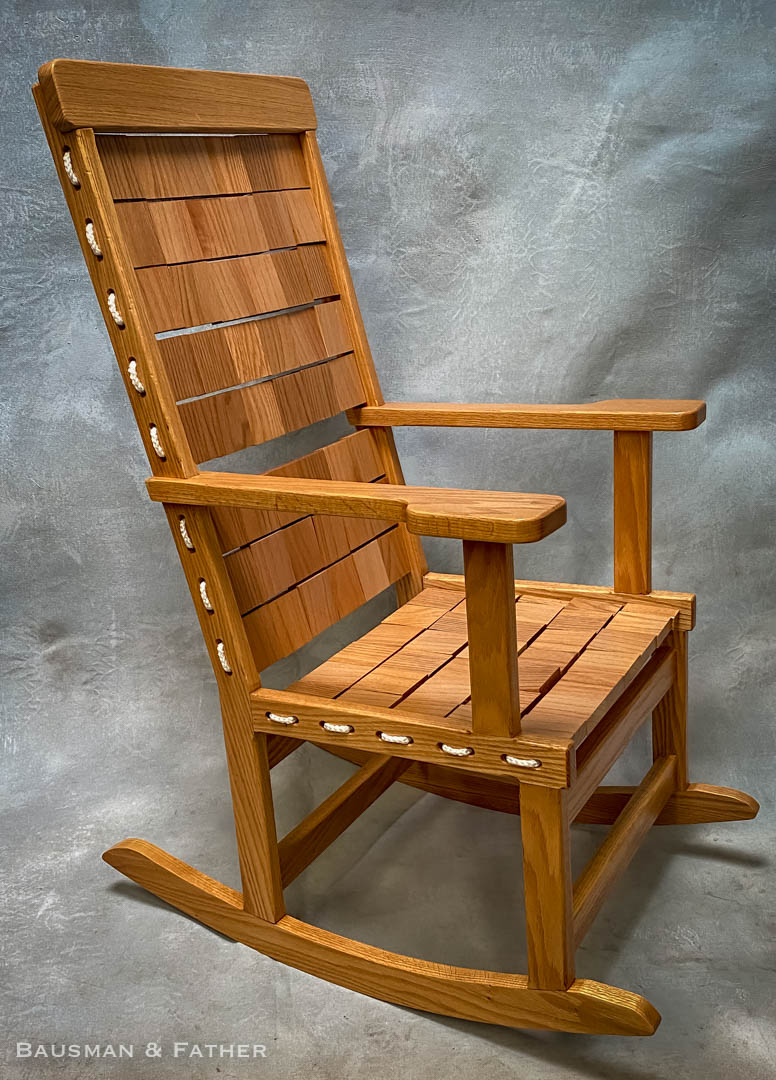 This rocker was brought to Mark (an antique furniture restorer), by a woman whos husband had started the rocker but passed away. Mark completed the assembly of the rocker and the woman now has her husbands rocker.

Chris Cobler was inspired by our rockers, making this rocker with his own variations. 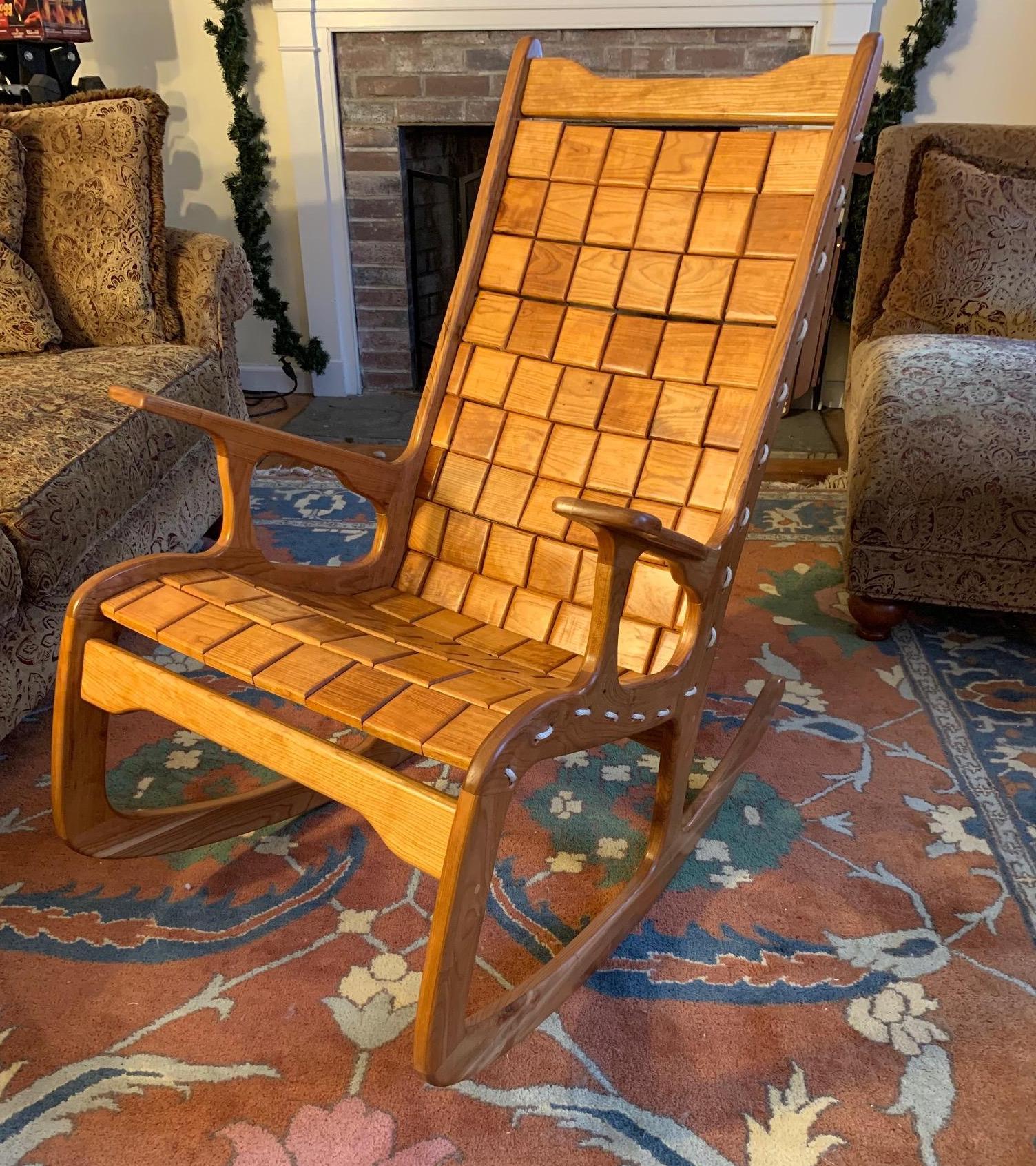 The original that has inspired so many imitations. While you may find chairs with similar features, none can match the comfort and style of our patented design. If you've ever sat in an authentic Vermont Folk Rocker we're sure you'll agree! 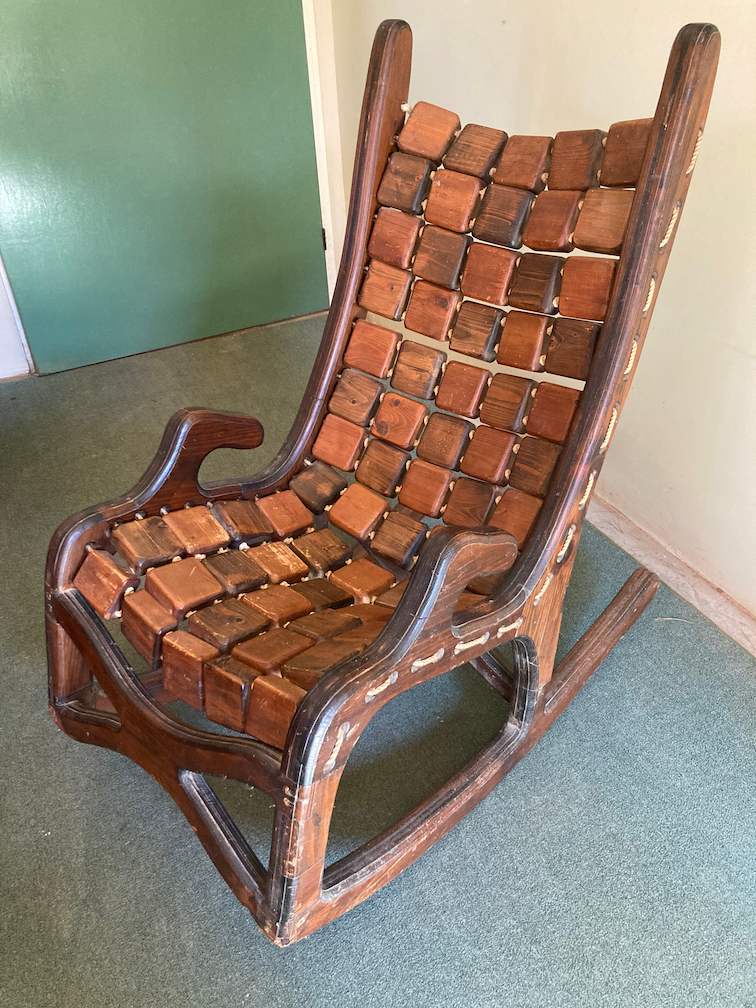 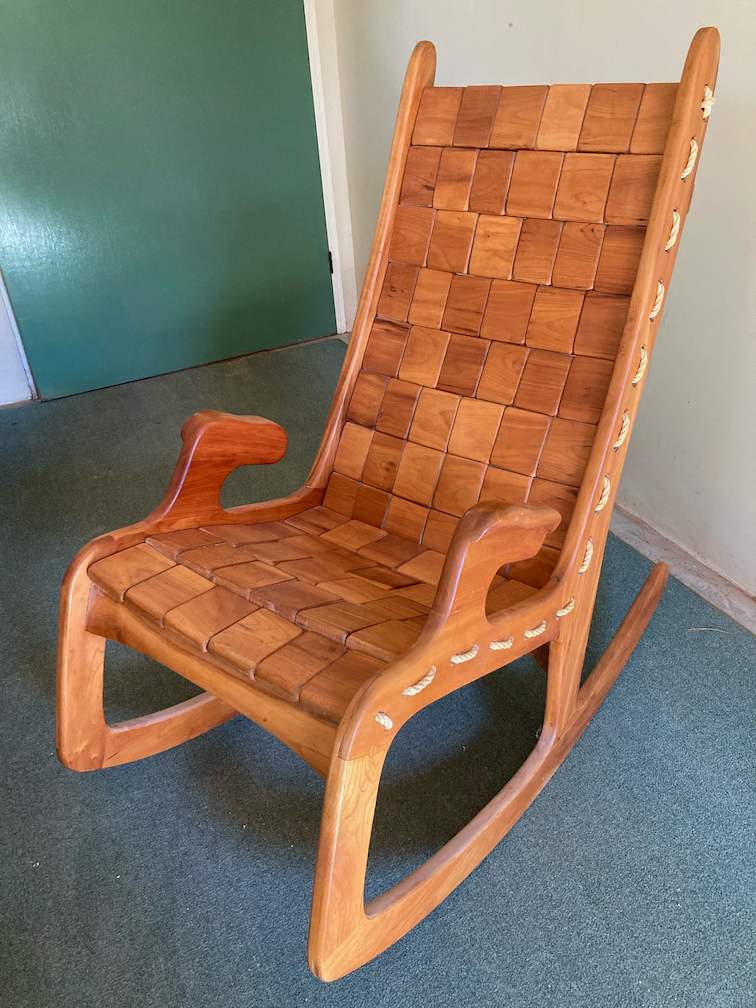 late 1970s - An early version of the rocker, with arms separated from the back. 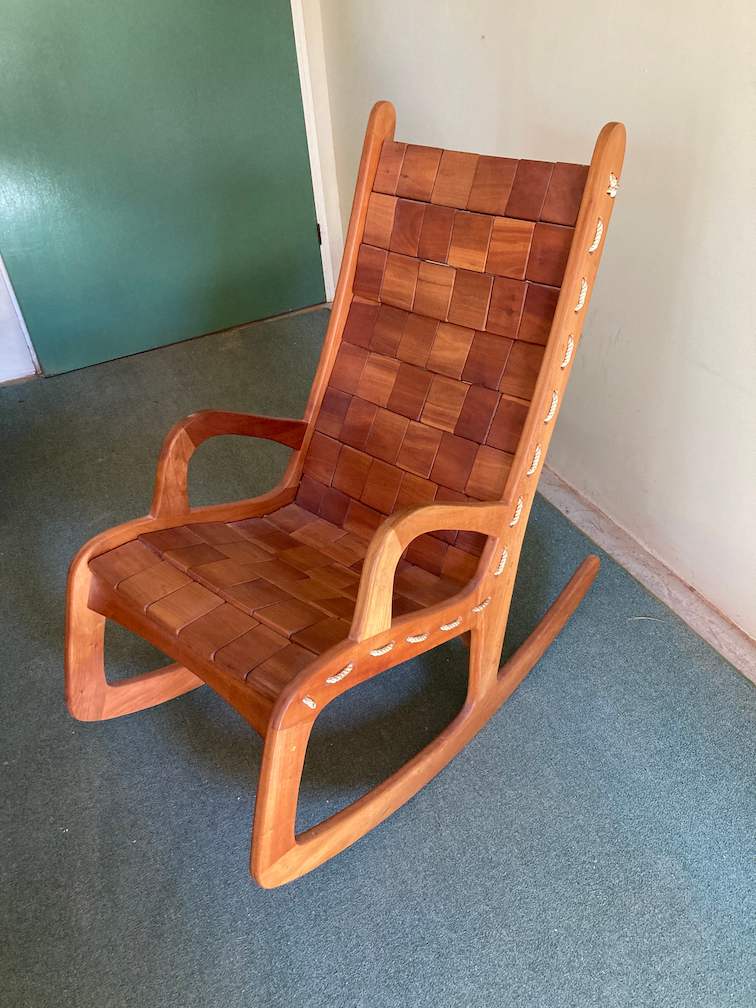 early 1980s - The rocker design gets closer to its current form, with arms that loop back, connecting with the frame. 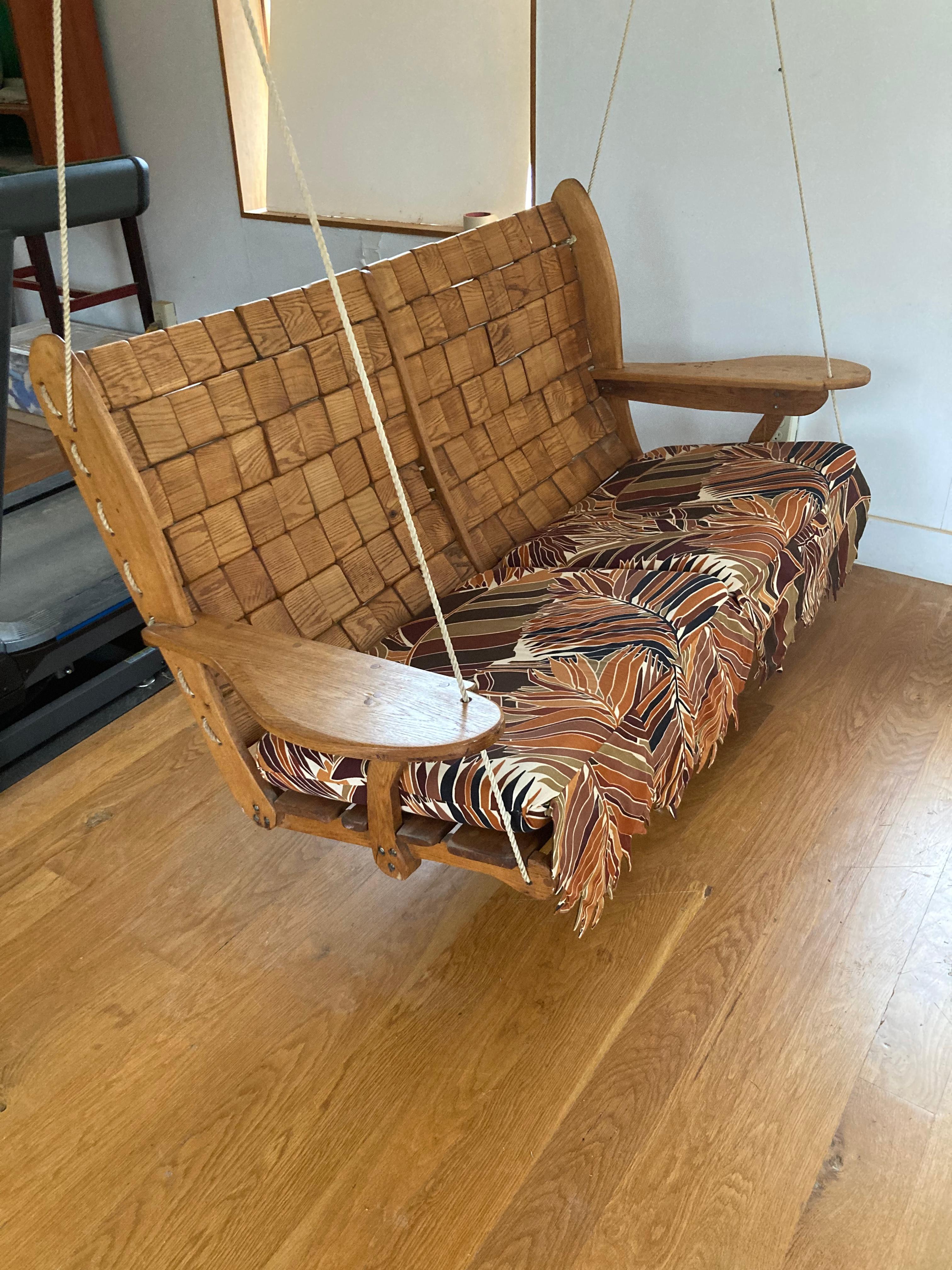 1978 - This swing was a wedding present to Jerry (Jim’s brother) and his wife Beth. 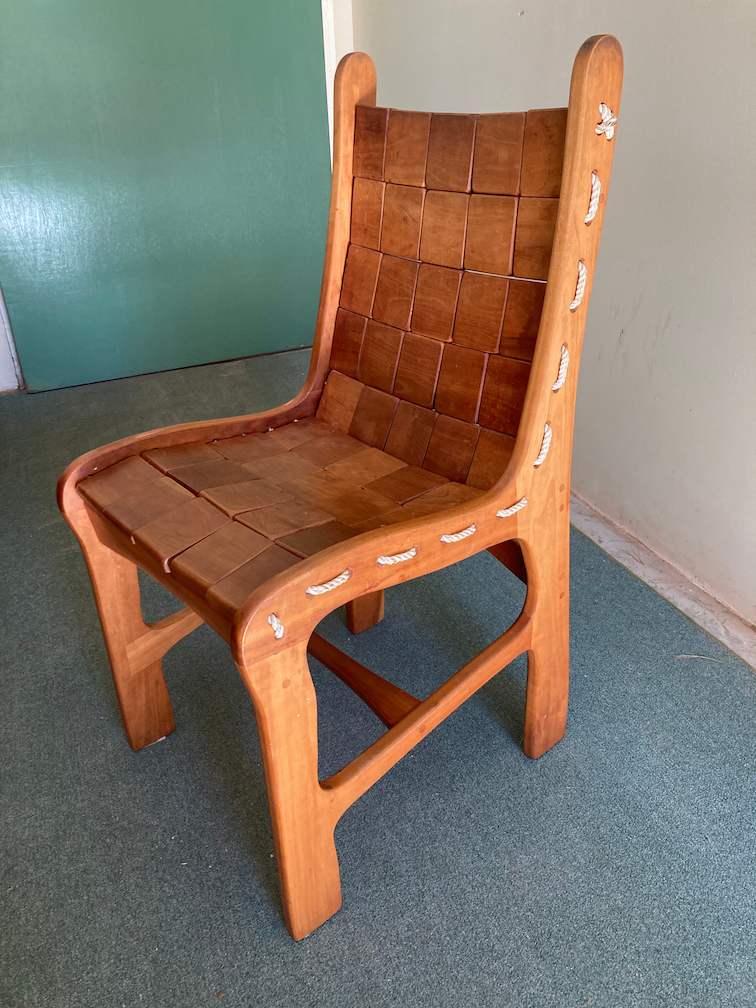 early 1980s - Dining chair. During the 1980s we created a variety of pieces for the home, featuring our unique seat and back. 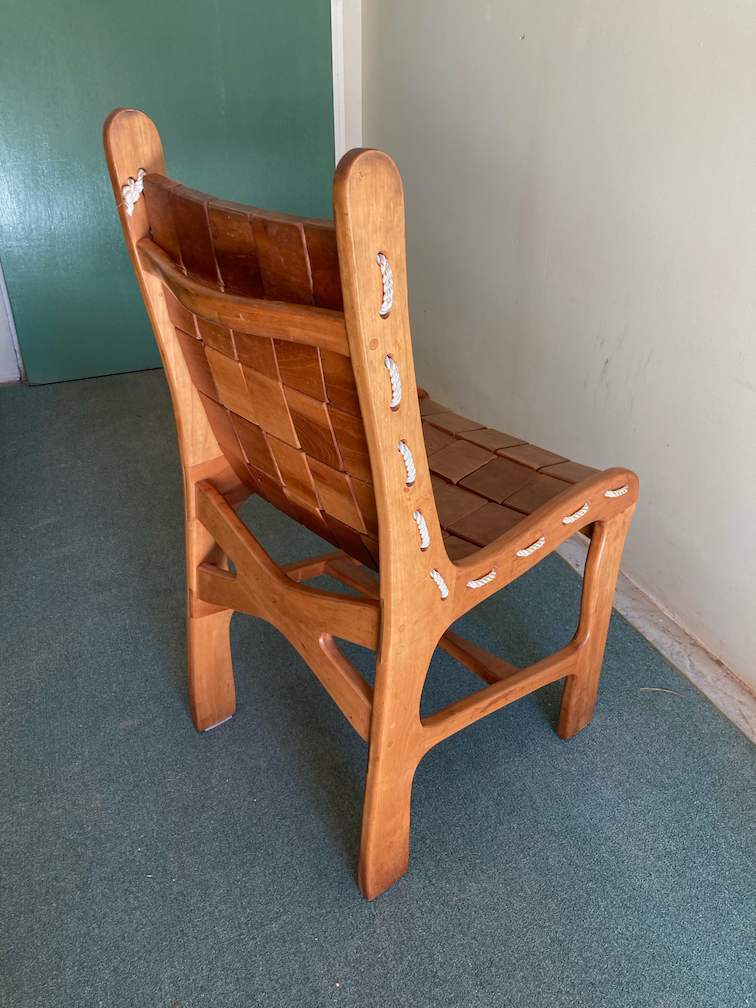 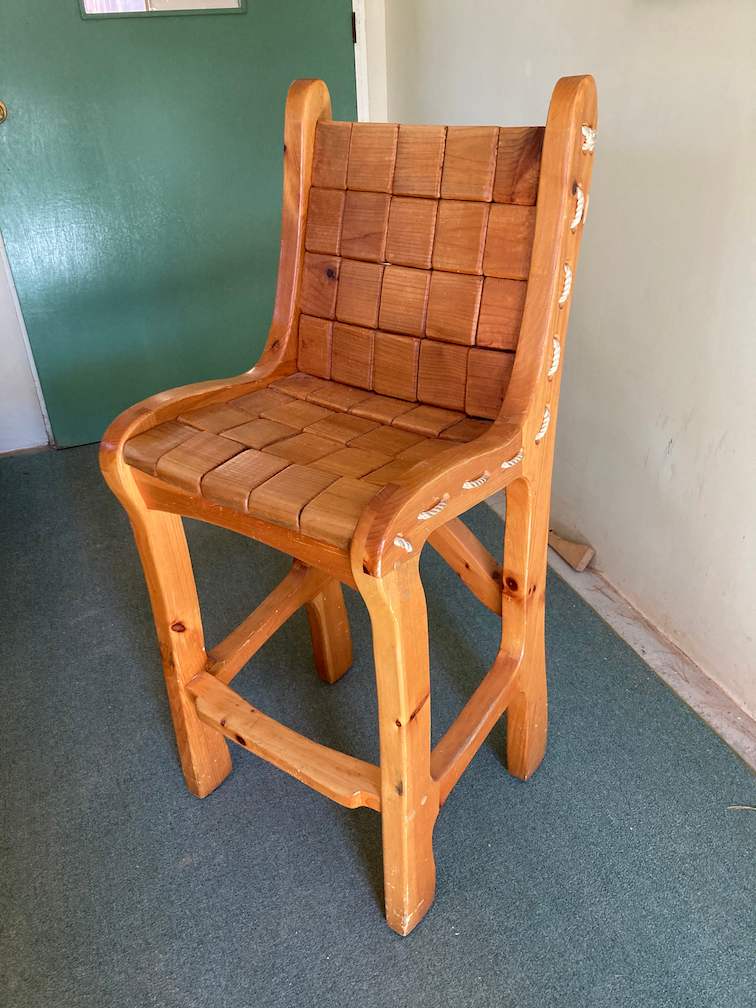 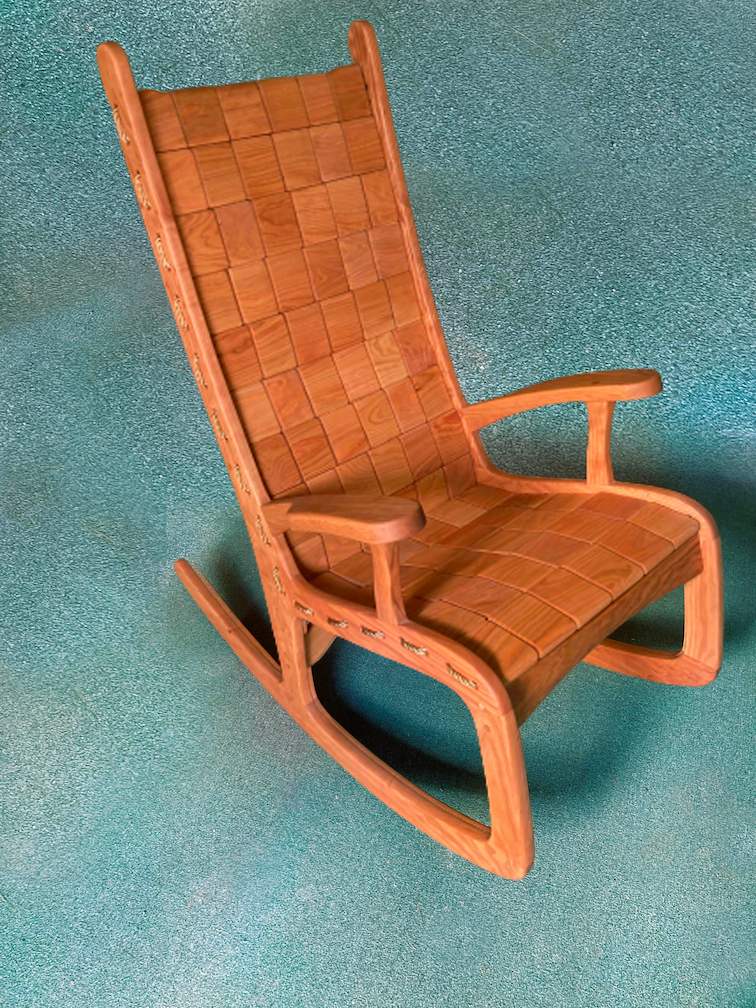 This is the rocker in its current form, since 1990 without significant change. Loved around the world, this one-of-a-kind design has provided comfort for decades, and will for many more to come.